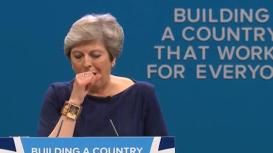 The major party conferences have come and gone and still we are no wiser as to how Brexit is going to unfold. As we noted in last week’s Briefing, the Labour Party’s policy appears to be that they will deliver Brexit, but a Labour Brexit, not a Tory Brexit, whatever that means. Brexit is Brexit and Brexit means being outside the European Union (EU), the single market and the customs union.

However, Labour is in opposition and, so, for the moment what it says is important but nowhere near as important as what the Conservative government says, as it is charged with negotiating the Brexit arrangements with the EU. Whether it can get whatever deal it negotiates, if any, through Parliament, especially the House of Lords, is another matter.

This week’s Conservative Party conference was dominated by three issues:

While Labour lost the last general election, it did not seem that way at last week’s Labour conference which had all the hallmarks of a victory rally crossed with a gathering of the devotees of the cult of “Jeremy”. Speaker after speaker proclaimed that Labour was no longer a “party in opposition” but a government in waiting”. What the difference between a “party in opposition” and a “government in waiting is” is difficult to discern because in either configuration you are in opposition.

But what has really spooked the Conservatives about Labour and the “cult of Jeremy” is that Labour appears to have captured the vote of the under 40s. Over 60% of the under 40s voted for Labour at the last election. The average age of Conservative Party members is 71. Go figure.

Corbyn is a complete 1970/80s throwback socialist, who believes in a managed economy, managed by the state that is, who is proposing an extensive program of renationalisation, a policy of tax, borrow and spend, and a greatly enhanced, legally underpinned role for trade unions, despite their absence of members. He is also an admirer of the late Hugo Chavez of Venezuela and leftist groups worldwide in general.

This week, speaker after speaker at the Conservative conference bemoaned how bad the “socialist seventies” had been in the UK and what an economic basket case Venezuela was. Both true. The only problem for the Conservatives is that no one under 40s remembers the 70s so it sends no shivers down their spine and, quite frankly, most British people probably do not know where Venezuela is, much less care about it. In their hearts the Conservatives know this which is why they are terrified of an election, which polls suggest would see Corbyn enter 10 Downing Street.

Which is probably the only reason Theresa May is still prime minister. A year ago, she was the political empress of all she surveyed, even if she was an accidental prime minister, there because all her opponents garrotted one another in the leadership election called when Cameron resigned. She told the 2016 Conservative conference that she would deliver the hardest of hard Brexits, out of the EU, the single market, the customs union and the jurisdiction of the Court of Justice of the European Union (CJEU).

Early 2017 she was riding high in the polls. 20 percentage points ahead of Labour. April she went for a walking holiday in the Welsh hills. No one knows what happened during that holiday. Did she have a vision? Did the spirit whisper in her ear? When she returned she called a general election for June, so as to boost her parliamentary majority. A presidential style campaign built around a “strong and stable” Theresa May backfired disastrously, the Conservatives lost their majority, and only continue in government with the support of the Ulster-based Democratic Unionist Party (DUP). A weak and wounded prime minister, heading a deeply divided government, split over how Brexit should be delivered, charged with the most complicated negotiation any UK government has ever faced in peacetime.

Only the fact that there is no obvious successor in the House of Commons and a Conservative leadership election would now be another time-wasting distraction from the pressing matter of Brexit, while an early general election could see Labour in government, has kept her in place.

As I write, on Friday morning, the newspapers are full of talk about plots to dispose of May following her disastrous conference performance last Wednesday. Napoleon used to say “I know he is a good general, but is he lucky”. Whether she is a good general or not and the answer is, probably not, she is certainly unlucky, losing her voice during her conference address, with a comedian running on stage to hand her a dismissal notice, and, to top it all, letters falling out of the conference logo on the wall behind her.

And all the while she struggles to define what Brexit means and how it should be delivered. A few lines in her conference speech about Brexit that said nothing new. Yet, from Sunday to Wednesday, speaker after speaker at fringe events around the conference, called for the hardest of hard Brexits, with Boris Johnson, the foreign secretary kicking things off in a newspaper interview as the conference began saying that any transition arrangements should not last a second more than two years, that the UK should not implement any new EU rules during the transition and ruling out payments to the EU in the context of any future commercial relationship with the EU.

Taking what Johnson said, along with other comments by senior politicians, the Conservative appear to want a “double bubble, hokey cokey, cake and eat it” deal with the EU.

“Double bubble”, we have noted before, is an attempt to use the money that the UK owes the EU as a result of commitments it signed up to as an EU member to buy a transition deal and future trading relationships. In a word, using the same money twice. This is not a “generous offer” the EU will accept. “Agree to paying what you owe us, and then we’ll talk about the future”, has been the EU’s position from the get-go. It will not change now.

“Hokey cokey” sums up what Mrs. May said in a TV interview last Sunday. She told the interviewer that during the transition some sectors could drop out of the EU’s legal framework quicker than others. In other words, some parts of the UK economy would be “in”, while some parts could be “out”. She didn’t explain how, for example, if you had two factories cheek-by jowl, both manufacturing different products, one might be subject to EU law and the other not. In the economy as a whole, how do you draw lines between different sectors? For example, is a car a piece of metal or a bundle of software? Simply to state that you could have two different sets of laws governing a modern, integrated economy at the same time is to realise how impossible such a notion is. The EU’s position, again, is unwavering. All EU laws apply to all sectors for the total duration of any transition.

“Cake and eat it” is to ask for seamless, frictionless trade between the UK and the EU though a customs arrangement for the transition period, while the UK, at the same time, is free to negotiate and sign trade agreements with other countries. Again, the EU will not accept this. But it is a pipedream in any event. Last week’s the US’s decision to impose a 219% tariff on Bombardier should have brought home – to even the most starry-eyed Brexiteer – that when President Trump talked about signing a “beautiful” trade deal with the UK he mean “beautiful” for the US, with the UK being skinned alive. If Bombardier did not fully deliver the message then the decision by the US and others this week to object to a EU/UK arrangement to divide EU World Trade Organization (WTO) quotas between the two should have. A constant refrain of the Brexiteers has been that, absence a deal with the EU, they can revert to trading with the EU on WTO terms. Simpler said than done it would appear.

Next week sees another round of negotiations between the UK and the EU over the Article 50 exit agreement. As ever, a financial settlement, citizens’ rights and matters relating to Ireland are the three issues that have to be dealt with. Press reports this morning suggest that the UK will refuse to discuss financial issues, other than in the context of transition and future trade arrangements. Double bubble it is. Expect the talks to go nowhere.

Given the political chaos in the Conservative Party and in the government, it is becoming increasingly difficult to see how the UK government can walk back from the positions it has taken in the negotiations with the EU. Even if it could, why would the EU make any deal with a bitterly divided UK government, when it knows that there is less than a 50% chance of that deal being ratified?

This week Germany’s leading employers’ organisation advised its members to prepare for the “hardest of hard Brexits”.

This chimes with our own long-standing advice: “plan for the worst; hope for the best”.

But, the hope is rapidly draining away.