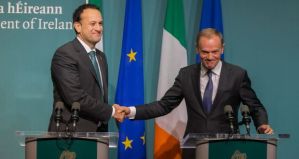 Dr. Fox, with no irony, also called for “an economic Brexit, not a political Brexit”. But, as noted below, UK government papers published yesterday show that there is no economic case for Brexit. Brexit will only bring the UK economic pain. Brexit is political or it is nothing.

Further, it also has to be remembered that the UK government decided that leaving the EU meant leaving completely, not just quitting the political structures of the EU, but leaving the single market and the customs union as well, both of which provide the framework for borderless and friction-free trade within the EU in goods, services and data.

All of the problems that the UK now confronts flow for those two decisions, to leave the EU and to leave in the most absolutist fashion possible.

That the economics do not add up was made clear in UK government papers published yesterday. A free trade agreement with the EU, to replace single market and customs union membership, would cost the UK 4.8% of its expected economic growth over the next 15 years, according to a ‘EU exit analysis’ . That lost growth would result in an additional £55 billion of UK government borrowing by 2033, more than nullifying the so-called ‘Brexit dividend’ predicted by Leave campaigners during the 2016 referendum.

The paper was published by the cross-party Exiting the EU committee of MPs, against the wishes of government ministers.

“The analysis suggests that there will be an adverse effect on the economy of the UK and all its regions, and that the degree of impact will depend on the outcome achieved in the negotiations,” said Hilary Benn, the chairman of the Exiting the EU committee.

It adds that a free trade agreement with the US would offer “a benefit to UK GDP of 0.2% in the long-term”. Meanwhile, additional pacts with countries in the trans-Pacific and south-east Asia regional blocs, China, India, Australia and New Zealand would “add a further 0.1% to 0.4% of GDP”.

A ‘no deal’ Brexit where the UK would revert to trading with the EU-27 on the basis of World Trade Organisation rules would cost 7.7% of GDP, the government estimates. That would lead to increased government borrowing of £20 billion and £80 billion, respectively.

That apparently, is OK by the Foreign Secretary, Boris Johnson, who told a Daily Telegraph meeting that a “no deal” Brexit should not hold any “terrors” for Britain because the country would “do very well” under World Trade Organisation rules. Comments at odds with his own government’s analysis.

But then none of the Brexit ultras in the UK cabinet, Johnson, Fox or Michael Gove, have any business experience. Two are journalists and one a medical doctor. Not one of them has ever tried to send a truck loaded with goods from Dover to Calais, much less close a business deal. www.theguardian.com/customs-checks-tailbacks

Last week, UK prime minister, Theresa May, made a speech in London outlining how her government saw the future relationship between the UK and the EU. It can best be summarised as her saying that “we are leaving completely, but once we have left we would like to opt-back in to all the best bits, the bits we like, while having nothing to do with the bits we don’t like, such as the freedom of movement of people. And we want to be completely free to change our laws at any time we like to diverge from EU laws when we decide we no longer like them.”

As the Prime Minister of Luxembourg, Xavier Battel cuttingly put it: “They were in with a load of opt-outs. Now they are out, and want a load of opt-ins.”

As if in reply to Mrs. May’s speech, this week, Wednesday, March 7, the EU published the draft of the terms it would be prepared to offer the UK after it leaves. On the table will be little more than a standard Free Trade Agreement. The EU has borrowed UK Prime Minister Theresa May’s own words: Brexit means Brexit. Out means out. There is no half-in, half-out.

“I fully understand and of course I respect Theresa May’s political objective to demonstrate at any price that Brexit could be a success and was the right choice… but sorry, it’s not our objective in this.”

Tusk added that the British red lines of wanting to be outside the EU’s single market, customs union and the jurisdiction of the European Court meant the relationship would be limited to “only” a free trade agreement.

A day later, after meeting the Taoiseach (Irish Prime Minister) in Dublin, Tusk responded to a speech by the UK Chancellor, Philip Hammond, arguing for a bespoke deal covering financial services as part of an “ambitious free trade deal”. Tusk said:

In the FTA we can offer trade in goods, with the aim of covering all sectors, subject to zero tariffs and no quantitative restrictions. But services are not about tariffs. Services are about common rules, common supervision, and common enforcement. To ensure a level playing field. To ensure the integrity of the Single Market. And ultimately also to ensure financial stability. This is why we cannot offer the same in services as we can offer in goods. And it’s also why FTAs don’t have detailed rules for financial services. We should all be clear that also when it comes to financial services, life will be different after Brexit.

Bottom line: There will be no deal on financial services.

What needs to be kept in mind is that after Brexit, 19 out of the 27 EU member states will also be members of the Eurozone, that is, countries that use the euro. That amounts to 70% of all member states, but 85% of the EU’s GDP. With the UK going, in economic terms, the Eurozone is becoming the EU. The countries not using the euro are: Bulgaria, Croatia, Czech Republic, Denmark, Hungary, Poland, Romania, and Sweden.

As we argued in our report www.beergbrexit.blog/Taking-Stock on the Brexit process last January no rational economic and political grouping, such as the EU and Eurozone, is going to allow such a vital function as finance to be located outside its borders. Would the US allow the bulk of dollar clearance or key financial services on which the US economy depends to be located in Mexico City or Toronto?

The EU will see arguments about the alleged unique skill set and expertise of the City of London as little more than special pleading. After all, financial services is a business like any other and a business that the EU will want inside the Eurozone. If the only way that businesses currently located in London can access EU business is to locate within the EU then that is what they will do. Does anyone seriously think that hard-nosed, bottom-line oriented financial operators are so in love with London that they will sacrifice hundreds of millions of Euro in profits just to stay in that city?

If the status and business of the City of London is at risk then that results from the decision of the UK to leave the EU. A diminished City of London may be a consequence of Brexit.

Where does all of this leave business? As we write this today the position seems to us to be as follows:

Will there be a deal? Who can say? Anything can happen.

In all of the above we haven’t mentioned one small point. The issue of the reconstruction of a border, any sort of border, hard or soft, on the island of Ireland. That could be a deal-breaker, and not just in the long-term. Within the next couple of week. Again, from his speech in Dublin yesterday, EU Council President Tusk:

When I was in London last week, I heard very critical comments by Prime Minister May, and others, about the way the Irish border issue was presented in the draft Withdrawal Agreement.

We know today that the UK government rejects: “a customs and regulatory border down the Irish Sea”; the EU Single Market and the customs union. While we must respect this position, we also expect the UK to propose a specific and realistic solution to avoid a hard border. As long as the UK doesn’t present such a solution, it is very difficult to imagine substantive progress in Brexit negotiations. If in London someone assumes that the negotiations will deal with other issues first, before moving to the Irish issue, my response would be: Ireland first.

No deal on Ireland, then no deal. In poker terms, has the EU just gone “all in” on Ireland?

Final message: Hope for the best but prepare for the worst.

Early next week we will be publishing a Brexit Briefing Special on Ireland.

One thought on “Opting-Out and Opting-In on #BREXIT”